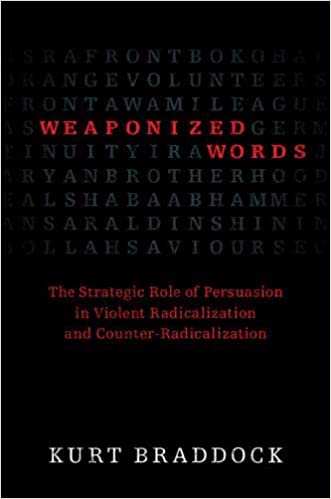 In his debut book Weaponized Words: The Strategic Role of Persuasion in Violent Radicalization and Counter-Radicalization, Kurt Braddock focuses on the role of narratives and persuasive techniques in countering and preventing violent extremism (P/CVE). Braddock begins his work with a puzzle he encountered during his academic work: Why do discussions about terrorism rarely refer to theories of persuasion, psychological influencing, and communication studies? After all, the study of persuasion has produced a considerable number of theories and empirical evidence over the last decades and is used often, for instance, in the context of marketing and advertising. To Braddock, this body of research represents ŌĆ£loaded weapons on a shelf,ŌĆØ ready to be picked up and shot, if only discovered and utilized by the appropriate actors. In the following chapters, the author not only details how narratives and techniques of persuasion are currently used both by and against extremists, he examines some of the curiously under-utilized, yet highly relevant theories of persuasion that could make counter-radicalization efforts more effective.

Studies have shown that persuasion through narratives ŌĆō via stories rather than argumentation ŌĆō is extremely effective, because it allows the audience to become immersed in the story and experience a high degree of identification with it, developing parasocial relationships with characters in the narrative. Reactance and arguing against persuasive messages made in narratives is often lower than when persuasion is sought through other means, because narratives mask persuasive intent. When individuals are aware of persuasive attempts, they are likely to scrutinize the messages carefully. If presented in a story, akin to those watched or read for entertainment, the persuasive intent is hidden and the likelihood of disagreeing or arguing back decreases.

Extremist organizations, as many studies have shown and Braddock reiterates, use the persuasive power of narratives extensively, whereas P/CVE campaigns less often utilize the findings from research on persuasion for their ends. Especially the evocation of emotions ŌĆō not only negative ones as in the classical counter-narrative detailing the atrocities and lies of extremist organizations, but positive emotions such as hope and pride ŌĆō can be communicated effectively through narratives, if constructed effectively. Maybe the most important take-away from Weaponized Words is, that counter-narratives, although a serious endeavor and mechanism to deter political violence, can benefit from the same persuasive and immersive power that fictional stories elicit, and that those involved in the development and implementation should not shy away from prioritizing stories over argumentative modes of communication.

Braddock, an Assistant Teaching Professor at Pennsylvania State University, places less emphasis on the evaluation and critique of existing P/CVE campaigns, but dedicates a considerable number of pages to putting theory to practice. All three of the chapters concerned with the application of persuasion and narrative theory to the P/CVE context, detail how these theories could guide practice without limiting the creativity necessary in approaching the task. His book, therefore, does not remain on the meta-level of scholarly investigation, but translates his findings into practical guidelines. Consequently, BraddockŌĆÖs work is not only of interest to an academic readership, but to practitioners involved in counter- or alternative narrative campaigns. Readers will find an accessible, jargon-free and engagingly written work that is relevant for all P/CVE contexts. Braddock does not limit himself to the US context, a particular type of counter-radicalization campaign (e.g. aimed at a specific target group or countering a particular stage of radicalization) or narratives built upon a particular ideology. His findings, therefore, should be of use to a variety of actors involved in P/CVE.

Narrative wars, propaganda and competition over hegemony of meaning as well as their, supposedly, more friendly counterparts such as public relations or political communication, have been a decisive feature of conflict for centuries. Competition over dominant narratives and the ŌĆścorrectŌĆÖ framework for the perception of reality is now exacerbated by the rise of digital communications and asymmetric conflicts with identity-based extremist groups characterized by tribalism and build upon strong, defining narratives. It is an axiom to state that ŌĆ£those who tell (and live) the best stories will rule the futureŌĆØ[i]; in politics but also in society more generally. Braddock presents one of the puzzle pieces to equip those tasked with countering extremism and fighting the narrative wars in a manner useful to academics and practitioners alike.

Linda Schlegel holds a Bachelor’s in Liberal Arts from University College Maastricht and a Master’s degree in Terrorism, Security and Society from King’s College London. Her research interests comprise (online-)radicalisation, extremists’ use of social media, processes of identity construction of extremist groups, and societal resilience to terrorism. She is a regular contributor to The European Eye on Radicalization and tweets here @LiSchlegel.

[i] Sachs, J. (2012). Winning the Story Wars: Why Those Who Tell (and Live) the Best Stories Will Rule the Future. Harvard Business Review Press: Brighton.